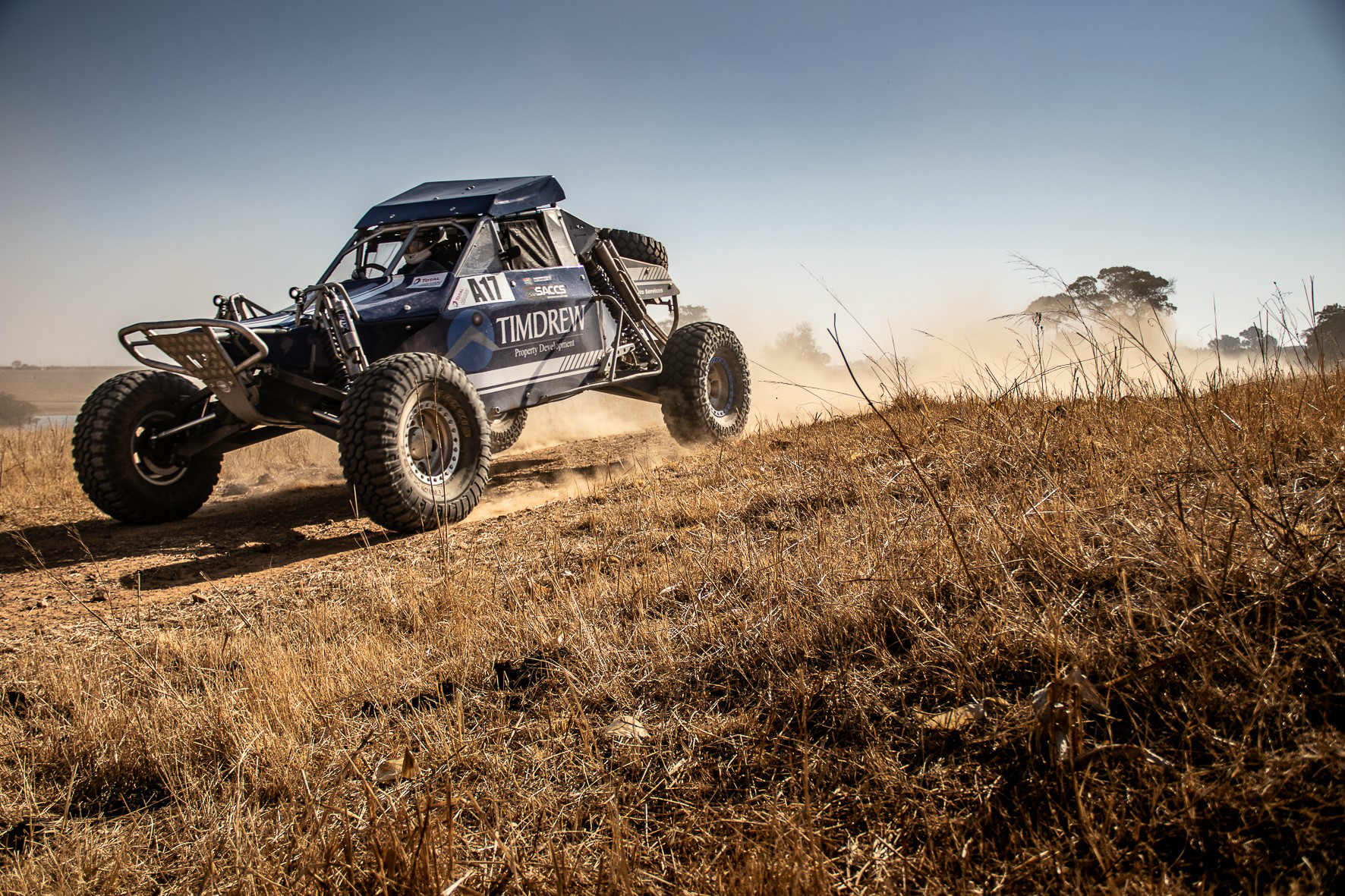 Teams happy to be racing as Bronkhorstspruit 400 qualifying gets underway

Dusty conditions could not keep the smiles off the faces of the teams competing in the Bronkhorstspruit 400, the second round of the South African National Cross Country Series (SACCS) that got underway today after a break of almost five and a half months due to the world health crisis. The 67km Qualifying Race determines the starting order for the main race tomorrow, 15 August where a little, unfortunate, history is being made as no spectators are allowed at the race.

With limited crew members and no spectators, the Designated Service Park (DSP) and Start/Finish at the Soetdoring Function Venue outside Bronkhorstspruit where Race Headquarters is situated for the duration of the event, was rather quiet but the atmosphere was upbeat and the sound of racing engines was welcomed by all.

In the Production Vehicle Category, it was the defending champions and current leaders, Henk Lategan/Brett Cummings (Toyota Gazoo Racing SA Hilux) who posted the fastest time after the 67km Qualifying Racebdespite Lategan having to keep a water bottle that was rolling around in the cabin, away from his feet during the first section of the race. Lategan/Cummings (00:47:21) were 20 seconds faster than Chris Visser/Danie Stassen (Total Excellium Toyota Hilux) with their Toyota Gazoo Racing SA team-mates, Giniel de Villiers/Juan Möhr (00:48:53) rounding off the all Toyota Hilux podium. Möhr deputises for De Villiers’ regular navigator, Alex Haro, who could not travel from Spain due to the pandemic.

The two Team Ford Castrol Cross Country Rangers in the hands of the Woolridge brothers rounded off the top five with Lance/Elvéne Vonk (00:49:29) fourth after a route they described as nice, fast and flowing while Gareth/Boyd Dreyer (00:49:39), who had last been in racing seats 14  months ago, admitted that they were a bit rusty, but only 10 seconds separated the two teams.

With teams in the FIA Class taking the first five positions, it was the Horn brothers, Johan and Werner (Malalane Toyota Hilux) who posted the fastest time (00:49:48) in Class T and were sixth in the Production Vehicle Category after a problem-free outing. They were 12 seconds faster than their Class T rivals, Gary Bertholdt/Geoff Minnitt (Total Excellium Toyota Hilux) who were eight overall with Shameer Variawa/Dennis Murphy (Toyota Gazoo Racing SA Hilux) in the FIA Class sandwiched between the two Class T teams after they lost time overshooting a few turns.

Brian Baragwanath/Taye Perry (Century Racing CR6) were ninth fastest (00:50:01) – seventh in the FIA Class – and closely followed by Clint Weston/Gerhard Snyman (Schalk Burger Motorsport King Price Extreme) who were only seven seconds adrift. The pair were happy with the car and enjoyed the route and rounds off the top ten.

Wors Prinsloo/André Vermeulen (Neil Woolridge Motorsport Ford Ranger) were third fastest in Class T (00:51:28) and found themselves just outside the top 10 in 11th place. Johan and his son, Sean van Staden (Elf Renault DE Duster) were 12th (00:51:49) and are looking forward to score points with their brand-new FIA vehicle while the husband and wife team of Marius and Jolinda Fourie (FIA Class Ford Ranger) were 13th.

Terence Marsh, who made use of a stand-in navigator for the Qualifying Race, Wade Harris (Red-Lined Motorsport Nissan Navara), as regular navigator Letshego Zulu had business commitments but will take up her seat for the main race, dropped to the back of the field due to a speeding penalty. A broken gear linkage just before the 14km mark resulted in their team-mates, Ernest Roberts/Henry Köhne, not being able to complete the Qualifying Race, but they will be back in action on Saturday.

Tim Howes/Gary Campbell (Zarco Magnum) will lead the Special Vehicle Category and Class A after an enjoyable outing. Their time (00:55:14) was only 31 seconds faster than Nico du  Rand/Rickus Hattingh (CanAm Maverick) who will lead the Class G (Side-by-Side) brigade and will start second in the Special Vehicle Category. Kent Rutherford/Gerhard Schutte (Red-Lined Motorsport Can-Am Maverick) posted the third fastest time in the category and were second fastest in Class G (00:55:50) and a great battle can be expected.

Peter Walter/Shaun de Villiers were also happy to be back in action. They posted the fourth fastest time in the category and were third in Class G in their Can-Am Maverick (00:56:09). A speeding penalty for husband and wife duo, Sandra Labuscagne-Jonck and Jaco Jonck (Total Agri Porter) pushed them from leading the Special Vehicle Category to fifth place while the defending Class G SxS champions, Werner/Leon Mostert (Elf Renault Can-Am Maverick) suffered the same fate and were demoted from leading Class G to sixth place overall and fourth in the SxS Class.

Andre Fourie/Hendrikus Pienaar (BAT Spec 3) will also start at the back of the field and will bring up the rear in Class A after they were also penalised. Dean Bradbury/Timmy Botes (Canon Rotex) could not complete the Qualifying Race due to engine failure.

The Bronkhorstspruit 400 will continue on Saturday, 15 August with the main race that will consist of a 150km loop competitors will have to complete twice. Teams will return to the DSP for a compulsory de-control after completing the first loop and will take on the second loop at 12:00. Enthusiasts can follow the race on the RallySafe App on iOS and Android devices as well as on social media. 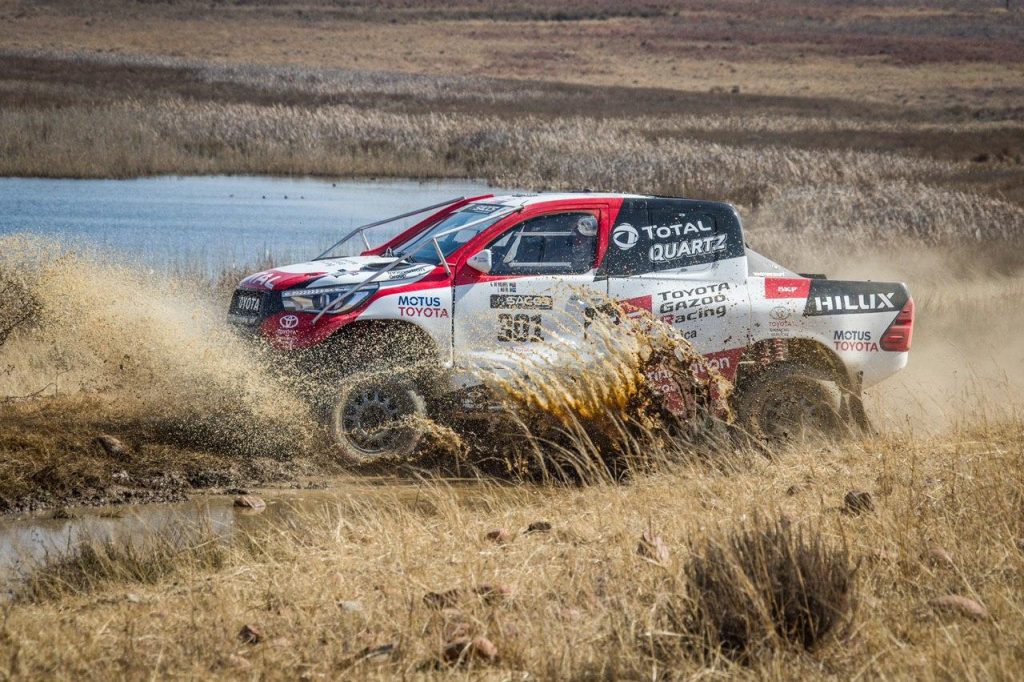 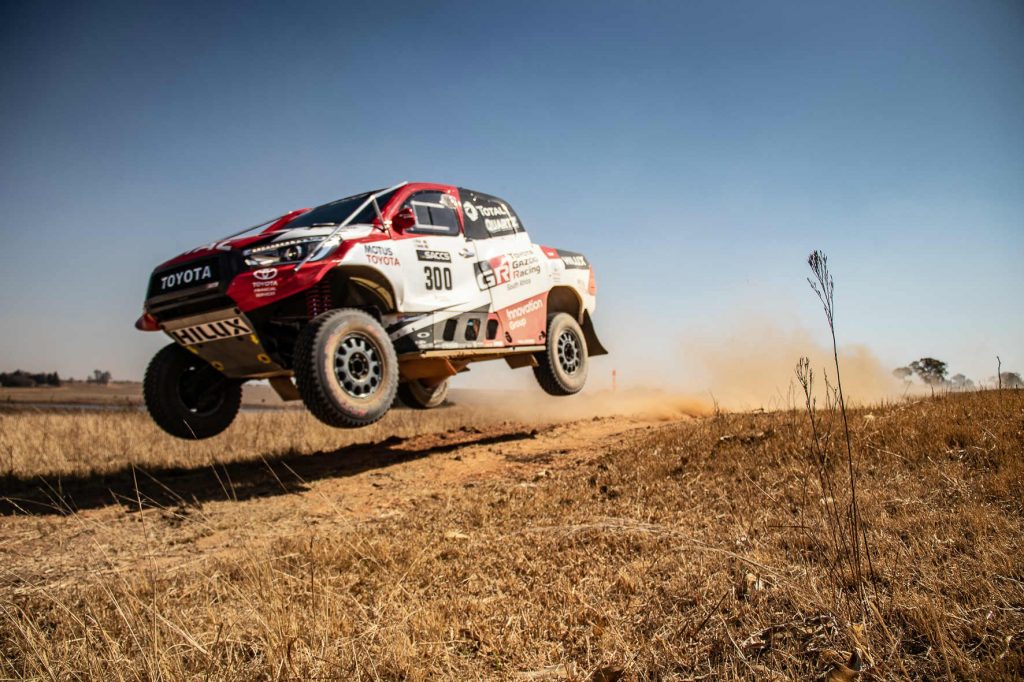 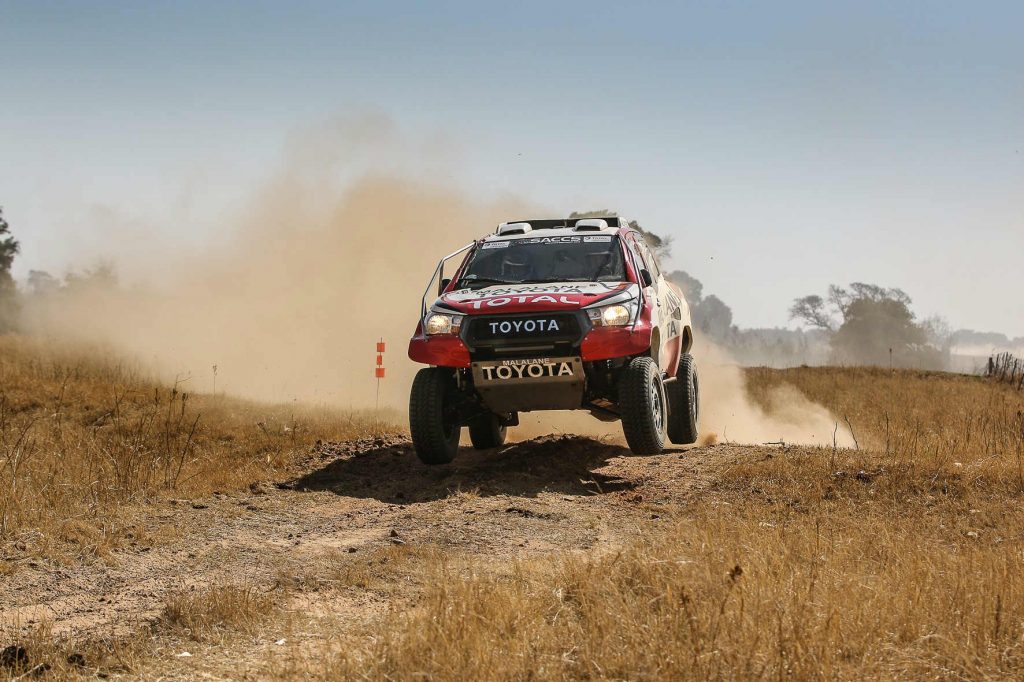 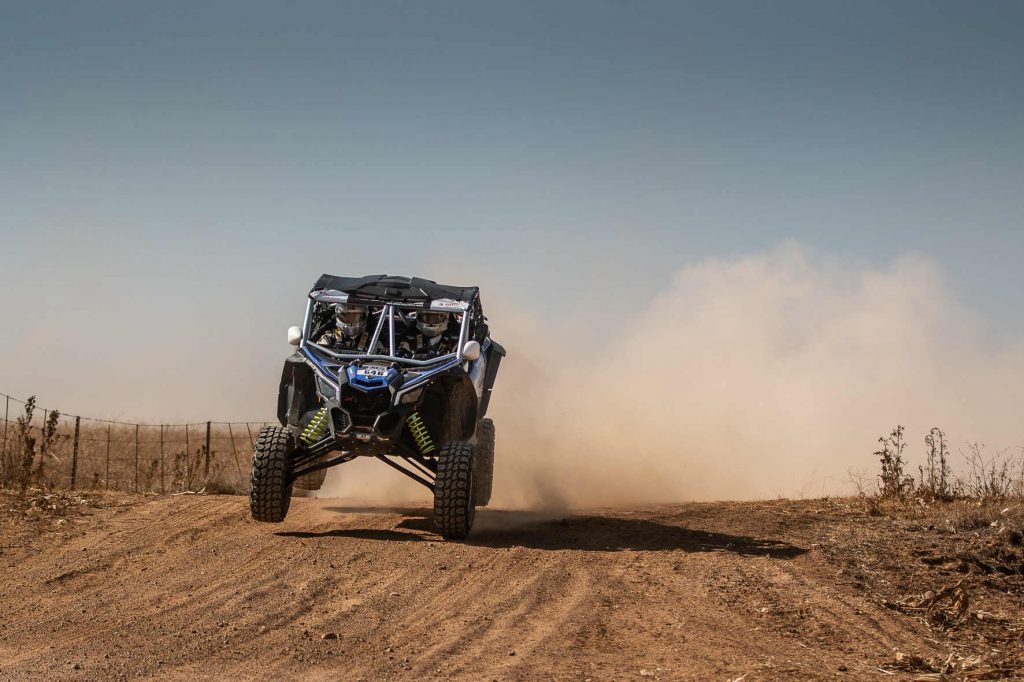 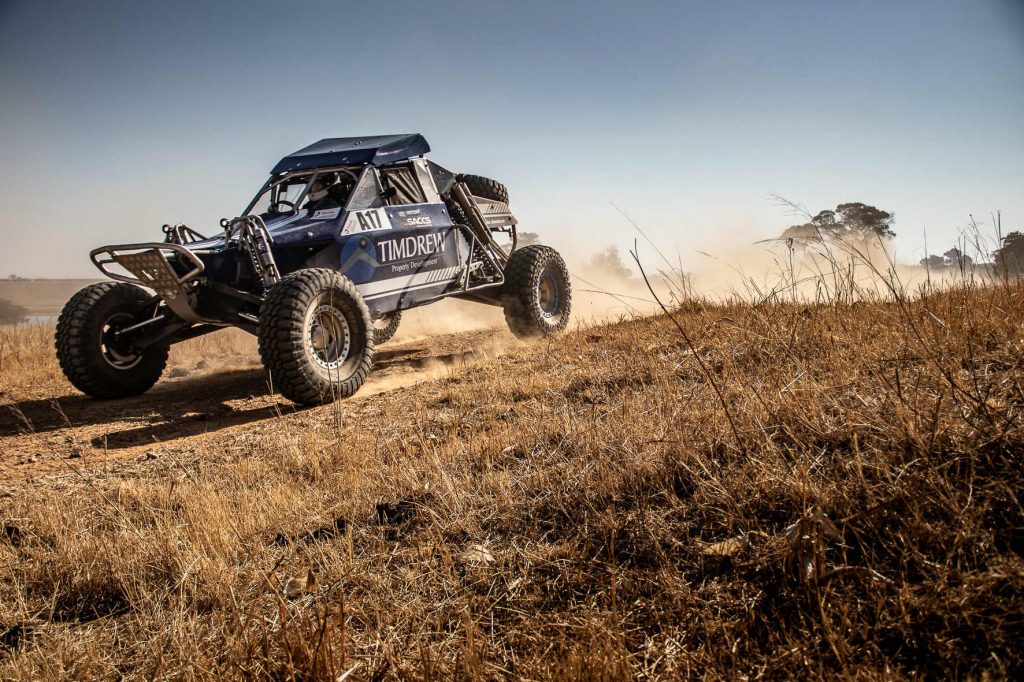