When the Berg 400, the second round of the 2019 South African National Cross Country Series (SACCS) on 17 and 18 May starts in the Winterton area of KwaZulu-Natal, it will be just short of three years since the motorsport legend, Gugu Zulu, passed away in July 2016 while attempting to conquer Mount Kilimanjaro. It will, however, also be just more than six months that his widow and business woman, Letshego Zulu, participated as a navigator in the SACCS Celebrity Challenge for the first time and she will be doing so again at the Berg 400.

Last year Letshego, a biokineticist by profession and an adventurer who has competed in various arduous events like the Absa Cape Epic, the Two Oceans Ultra Marathon as well as the Cape Argus Cycle Tour, became the first lady to navigate for Terence Marsh in the FIA Class in the Production Vehicle category. Letshego, who also participated in the 2011 Survivor SA reality television show that played off in the Maldives, enjoyed the Cross Country experience so much and is looking forward to more of the same when they tackle the Berg 400 in KZN.

According to Letshego, a self-proclaimed petrolhead, sitting next to Marsh at the last SACCS event of 2018, was one of her sporting highlights.

“I thought I had conquered the greatest of challenges on African soil having cycled the Cape Epic, run the Comrades Marathon and climbed Kilimanjaro, but I was wrong,” she said. “Navigating for Terence was the most exhilarating activity I have ever done. It was challenging in so many ways yet so rewarding,” Letshego remembers.

She said it was the bumpiest ride ever and she had never been shaken around so much in her life.

“It is certainly not for the faint hearted,” she said, but she is super excited to be in the navigator hot seat again and looking forward to the Berg 400.

Marsh, CEO of Red-Lined Motorsport, has been competing in Cross Country racing for almost two decades and has been behind the wheel of a Nissan Navara for the best part of 10 years. He played an instrumental role in the very successful Celebrity Challenge that was launched in 2012 in conjunction with SACCS and Nissan with the purpose to market the sport to new audiences. The aim of the Celebrity Challenge was to grow the support base of the sport and to create new Brand Ambassadors and these aims have been met and surpassed over the past six years.

Celebrities are trained and skilled up to participate in one or more events where they experience what it is like to be a professional navigator alongside Marsh, a former SA champion with no less than 107 national championship events under his belt.  They compete in the FIA Class alongside the best teams in the world in vehicles that are built and developed to tackle the toughest events imaginable.

Other ladies who have experienced life in the Celebrity Challenge navigator’s seat include model and actress, Roxy Louw and television presenter, Jeannie D while the Paralympic swimmer, Natalie du Toit and actress, Hlubi Mboya Arnold competed twice with Marsh.

While Letshego and the other celebrity ladies are guests at SACCS events, they get the opportunity to mix with more ladies who are actively competing in Cross Country racing. These include Sandra Labuscagne-Jonck who became the first lady in the SACCS to receive her Protea Colours in 2018 after winning the Special Vehicle Navigator’s Championship title last year. In 2015 she was nominated as one of nine ladies worldwide for a prestige Cross Country Rally initiative run by the FIA Women in Motorsport Commission and the Qatar Motor and Motorcycle Federation (QMMF).

This year, Labuschagne-Jonck moved in behind the wheel of the Class A Total Agri Porter with husband, Jaco, reading the notes.

Elvene Vonk is also back in the hot seat next to Schalk Burger (King Price Nissan Navara) in the Production Vehicle category. Vonk, the daughter of multiple South African National Rally champion, Kassie Coetzee, is also a multiple SA Rally Navigator’s Champion and has competed in the Cross Country series for a few years with her best achievement being third in the Class A Navigator’s Championship in 2016.

Another lady who has been on the SACCS scene, is Yolinda Fourie, who sits beside husband, Marius, in the Special Vehicle category. In 2017 she claimed the overall Special Vehicle and Class A Navigator’s title.

The Start and Finish of the Berg 400 as well as Race Headquarters and the Designated Service Park (DSP) will be at the Waffle Hut where enthusiasts will be able to get a close look at the race vehicles and rub shoulders with their favourite teams during the 30 minute compulsory service break after the first of the two 170km loops.

The Berg 400 can also be followed on the RallySafe App available for free download on iOS and Android devices. 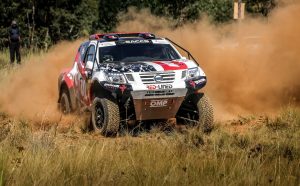 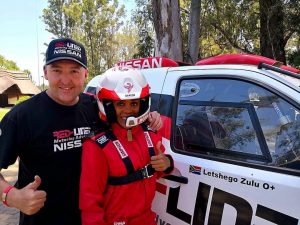